We give you The 411 On Artists and Musicians In OKC and surrounding areas.
​ If It's Indie, Edgy or Underground, We Cover It!

Written By Will Harrison

The Under Ground Monster Carnival 4 is upon us.  That’s right – Saturday, March 7th the event opens its fourth year, and it's going to be a blast! With the explosive stage shows like Burlesque and carnival sideshows.  There will be Panels consisting of Cosplay, Horror Movies and my favorite The Writers Mind – Mainly because I’m the host for it!

There will also be amazing vendors to boot, from local comic artists and writers to Horror film directors and actors.  The amazing John Ferguson AKA Count Gregore will be there to sign autographs and take pictures, Rock Gray of Evanescence and Living Sacrifice fame will be there promoting his new horror album. Special effects artists Madi Taylor and Nate Bright will be there to paint you up as your favorite monsters.

If you’re a Sci-fi or Horror fan, you don’t want to miss out on this fun all day event, at The State fair grounds in the Hobbies building. The festivities start at 1pm and go through 9 pm.  There will be gift bags for the first fifty people. Games will be played and prizes given out all day long. So come on out and support your local artists and geeks..

For more info, check out: 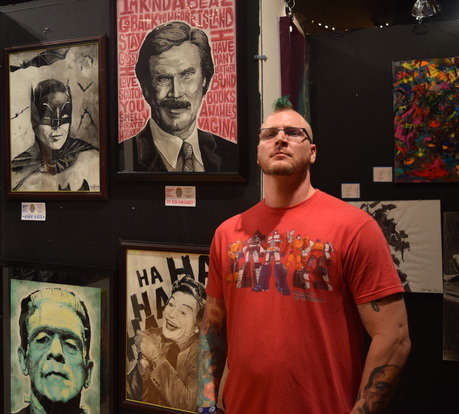 Artist Justin Magee pictured in front of his artwork.
Written By Will Harrison

I had a free moment, so I decided to go check out this unique event. I mean, how can you go wrong with pancakes & booze? Am I right?

The event had a really good turn out.  The crowd was large and the pancake line even larger.  I didn’t actually eat any pancakes myself, but I heard from a few attendees that the pancakes were very delicious.

There were many artists featured at this showing. All different styles, and mediums were represented. Whether it was Pop art, Abstract, Portraits or Photography, it was all there.  I snapped a few shots of my favorites while I was there, here's one on the left of this article. You can check out the other images on The OKC Edge facebook page. It was a great art show mixed with a wonderful atmosphere. The DJs were on spot with the right music for the show.  The atmosphere was friendly and creative. Exactly what you would want for an art show.

I had a great time covering this event. I would highly recommend you check out the next show.

For more info about future shows Stay tuned to our Concerts/Events page or watch for it on Facebook.